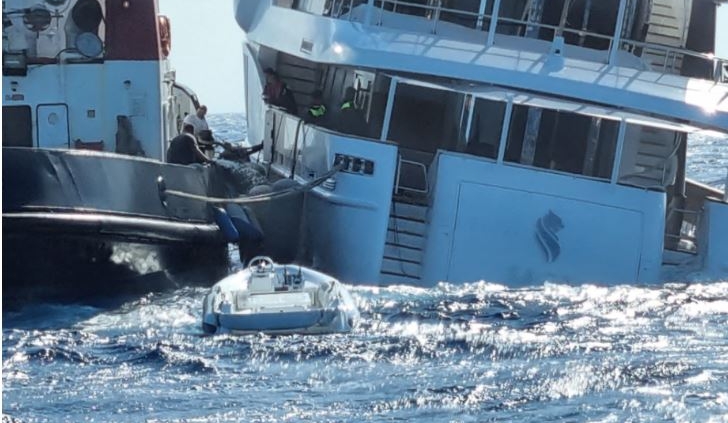 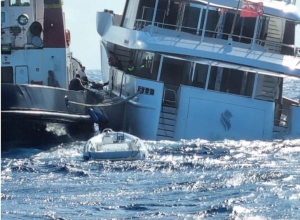 An Italian crew has been rescued after their yacht, 39m Saga, sank about nine nautical miles from Catanzaro Marina.

The boat was was sailing from Gallipoli to Milazzo when the crew reported it was taking on water at the stern. The Guardia Costiera (Italian Coast Guard) dispatched two patrol vessels to the scene, and four crew members were immediately evacuated.

A tow was attempted to take the yacht to Crotone, with the remaining crew being transferred, but according to ansa the situation got worse due to the weather conditions and the yacht’s incline.

Reports suggest that the team attempted to strand the yacht but despite best efforts, it sank quickly.

There will be an official investigation into the incident, but online speculation is focused around reports of water ingress from the stern.

“Beach clubs look terrific but are an extra risk. Same for the windows close to the waterline, or even below it. Building such designs is asking for trouble,” says one commentator. “The growing trend in all boats to put windows, doors and toy access on or below the waterline is crazy and not driven by basic design logic,” says another.

According to Yachtcharterfleet the 39.4m motor yacht My Saga was built by Monaco Yachting & Technologies. Her interior was styled by design house Jean-Marc Achy architecte and she was completed in 2007. The vessel’s exterior design was the work of Tim Heywood Design.

Saga was built with a steel hull and aluminium superstructure. Powered by twin diesel-electric Caterpillar (C-18) 503hp engines, the yacht had a range of up to 4,606 nautical miles and was said to accommodate up to 12 guests in six staterooms, with eight crew members.

Earlier this year (11 August 22), a brand new ISA superyacht Aria SF was engulfed by fire while cruising off the coast of Formentera in Spain. In June 2022, a similar sized yacht was involved in an incident and began taking on water near Doganbey Island off Seferihisar in western Turkey.