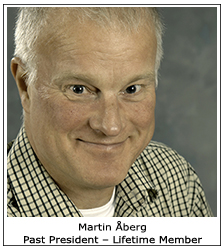 In 1990 I became a member of NAMI (National Association of Marine Investigators) in the USA and the first member from Europe.

Soon after my colleague Peter Clark from C Claims England also became a member of NAMI. Together we started to work for a European “NAMI” or rather an International Association of Marine Investigators (IAMI). Initially it was not easy to get Europeans to join us in the USA as NAMI was very much a US based organization. In 1994 at the NAMI annual training seminar in Boston, Massachusetts the president of NAMI, Larry Ross and the board of directors announced that NAMI should become “IAMI” (International Association of Marine Investigators). This was because the Board recognized that NAMI had quite a few members outside the USA. At the 1994 training seminar the International team included delegates from Venezuela, England, Germany and Sweden. NAMI had in effect really become IAMI.

At the 1994 training seminar the International team included delegates from Venezuela, England, Germany and Sweden. NAMI had in effect really become IAMI.

In the beginning of 1990-1991 we started MIX, Marine Intelligence Exchange. MIX was created by Peter Clark (C Claims, UK), Peter Siegfried (MCS, Germany), Eric den Drijver (ESMA den Drijver, the Netherlands) and myself. This was really the beginning of the international network in Europe regarding information about marine thefts. We started to share information in-between us regarding stolen vessels and we also tried to assist as much as we could since stolen boats where recovered in different countries from where they were stolen. This network was very successful and we became close colleagues.

IAMI Europe started in 1996 and held its first
annual training seminar in Southampton, UK in 1998.

Peter Clark from C Claims England hosted and arranged the whole conference and there were about 60 delegates attending. Ever since then IAMI Europe has worked to increase its membership. Every year since 1996 we have had a training seminar and these have been held all over Europe including the following locations:

We try to spread our training seminars all over Europe so we can reach more delegates. During the last years we had an attendance of between 60 – 90 delegates each year.

IAMI Europe’s Steering Committee started its work in 2001. Until then Peter Clark and Martin Åberg together with Peter Siegfried, MCS, Germany took care of all arrangements.

IAMI has always had very good support from the Law Enforcement community and indeed it is a tribute to all the hard work put in by the committee of IAMI which has brought representatives from all over Europe together, enabling far greater international collaboration.

IAMI Europe has grown during all these years and our annual training seminars are always attended by a lot of our members and also quite a lot of our spouses.The location each year has always been very well chosen.

2015 we started a Reconciliation Committee consisting of the IAMI president, two past presidents, one IAMI Steering Committee member, one IAMI Europe member and one IAMI Inc member who worked with all questions regarding chapterising IAMI Europe.The board of directors at IAMI Inc and the general business meeting in Knoxville, Tennessee, USA 2016 approved that IAMI EU will be chapterised.

At IAMI EU general business meeting in Athens, Greece 2017 also our European members decided that IAMI EU will be a chapter of its own.

So from October 2017 IAMI EU is totally run by its Steering Committee and its EU members.

IAMI EU has always been as a great family and we have a great time when we meet. Our training seminars have always had a very interesting agenda.

We always welcome new members to join us in our work to combat marine crime.